You are here:
Palomar 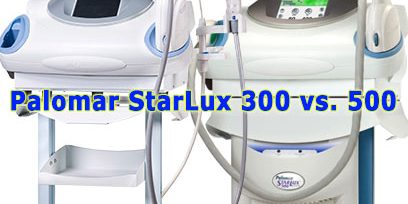 The StarLux 300 is the predecessor to the 500 and both are out of production but there are still plenty of these high performing workhorses available for resale. When it comes to revenue generation, the StarLux system can’t be beat. Following is a direct comparison of the Palomar StarLux 300 vs. StarLux 500. The newer treatment heads that are available for the 500 are certainly faster. However the StarLux 300 still remains a great system and provides great flexibility for treatments options available at your practice. What you need to balance is whether you want to process more patients at a greater investment or equipment that may still provide expanded treatments if you are on a much tighter budget.

As a leading supplier of used aesthetic lasers, The Laser Warehouse wants our customers to be able to make informed decisions when selecting equipment for their medspa or medical practice. The following information outlines terms and definitions to understand regarding equipment specifications as well as the primary features and differences between the Palomar StarLux 500 and 300 laser systems.

As far as IPL systems are concerned, the Palomar StarLux IPL platforms are considered to be very efficient workhorses that allow a medspa or medical practice to deliver a wide variety of aesthetic treatments to patients all via one base unit, used in conjunction with various handpiece options. Whether you choose a used Palomar StarLux 300 or a used Palomar StarLux 500 the final decision comes down to two key factors — equipment price and the power of the equipment which directly impacts your speed of service.

When evaluating equipment power and service delivery, the following items directly correlate with the equipment’s power and speed and are measurements you should consider:

The Table below highlights some of the key feature differences between the two StarLux models.

Base Unit Comparison StarLux 300 vs. StarLux 500

Interested in buying a Starlux laser? We have plenty of inventory and can guide you in selecting the best model for your business.